Enjoy Boating on the Lake!

Nevada County is a county located in the Sierra Nevada of California, in the Mother Lode Country. As of 2010 its population was 98,764. The county seat is Nevada City. (Information contained here was graciously provided by Wikipedia.org).

Nevada County was created in 1851.
The county was named after the mining town of Nevada City, a name derived from the term “Sierra Nevada.” The word nevada is Spanish for “snowy” or “snow-covered.” 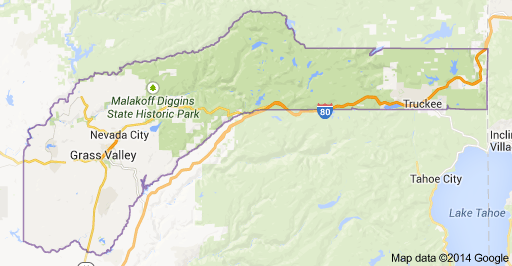 Nevada City was the first to use the word “Nevada” in its name. In 1851 the newly formed Nevada County used the same name as the county seat. The bordering state of Nevada used the same name in 1861. The region came to life in the Gold Rush of 1849. Many historical sites remain to mark the birth of this important region in California’s formative years. Among them are the Nevada Theatre in Nevada City, the oldest theater built in California in 1865. It operates to this day and once hosted Mark Twain among other historical figures. The Old 5 Mile House stagecoach stop built in 1890, also operates to this day as a provider of hospitality spanning three centuries.

This historical site still features “The stagecoach safe” that is on display outside the present day restaurant and is the source of many legends of stagecoach robbers and notorious highwaymen in the California gold rush era. The gold industry in Nevada County thrived into the post WWII days.

The county had many firsts and historic technological moments. The first long-distance telephone in the world, built in 1877 by the Ridge Telephone Company, connected French Corral with French Lake, 58 miles away. It was operated by the Milton Mining Company from a building on this site that had been erected about 1853. The Pelton wheel, designed to power gold mines, still drives hydro-electric generators today. Nevada City and Grass Valley were among the first California towns with electric lights. The Olympics, NASA, and virtually every television station around the country utilizes video/broadcasting equipment designed and manufactured by Grass Valley Group, founded in Grass Valley. Electronic medical dosing equipment was first developed and manufactured in Nevada County. The first commercially viable picture-phone was developed in Nevada City. More than fifty high tech and applied tech companies, and more than one thousand hardware and software design and development professionals call Nevada County home. The county is sometimes referred to as the “Silicon Valley of the Sierras.” The arcade video game was born in Nevada County, with Pong.

The Nevada County Narrow Gauge Railroad was built in 1876, and was the only railroad in the West that was never robbed, even though its primary freight was gold. (Builder-owner John Flint Kidder’s reputation made it clear that he would personally hunt down and kill anyone who tried.) The rail line closed in 1942 and was torn up for scrap.